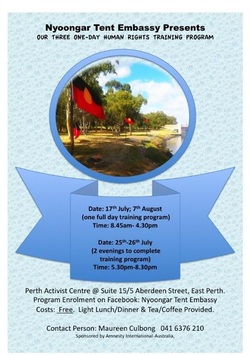 In July and August 2013, the Nyoongar Tent Embassy held free human rights workshops in Perth. All interested participants were invited to attend, with places for up to 100 participants.

Two full day workshops were held on 17th July and 7th August, and a third workshop was held over two evenings on the 25th and 26th July. The workshops were free with all materials and food provided. The workshops consisted of a full day's discussion on Human Rights and were well received by all attendants.

Mark Newhouse from the Equal Opportunities Commission spoke about Human Rights instruments and mechanisms in the UN and Australian system, with a focus on the E.O.C.'s report on breeches of equal opportunities in housing. Aunty Ulli Helen Corbett discussed the creation and foundation of the United Nations Declaration on the Rights of Indigenous Peoples. Aunty Maureen Culbong spoke about the important work of the Black Action Group. Patricia Ryder discussed important changes to the Aboriginal Heritage Act. Bella Brown gave a history of the Nyoongar Tent Embassy and Preston Culbong explained the significance of the Sovereignty Rebuttal Statement. From Amnesty International WA, Wendy Watson spoke about the Universal Declaration of Human Rights and from Curtin University, Dr Shaphan Cox and Dr Thor Kerr spoke about the report into the media representation of the Nyoongar Tent Embassy.

At the final workshop, a cake was shared to celebrate World Indigenous Day and the inherent, universal and indivisible right to self-determination for all Tribal Sovereign Peoples.
Powered by