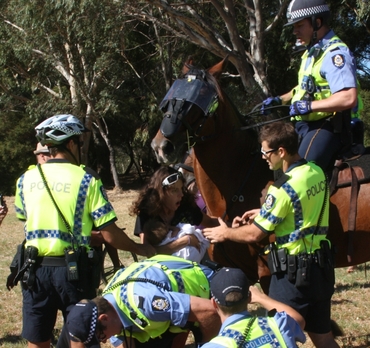 On 22nd March 2012, as Nyoongar Tent Embassy members were enjoying a peaceful afternoon of talks and culture, over 100 police invaded Matagarup in a shocking display of force and brutality. Their ranks included a tactical response squad, mounted police, a hovering helicopter and police dogs. The Nyoongar Tent Embassy Tribal Sovereigns declared that the police violence was not welcome at the Embassy and walked away from the rows of police to the other side of the island, where they congregated at the statue of Yagan. The police followed the Nyoongar Tent Embassy members, intent on harassment and provocation. Two policemen on horseback lunged at a pregnant woman holding a baby. The woman received cuts to her face from the impact of the police horse. The police violently arrested four people and assaulted several others, in some cases causing serious injuries. Police and rangers tore down tents and dumped private possessions into large bins. Resolved in the pursuit of their inherent, universal and indivisible right to self-determination even in the face of police brutality the members of the Nyoongar Tent Embassy regathered at the end of the day around the Sacred Fire. 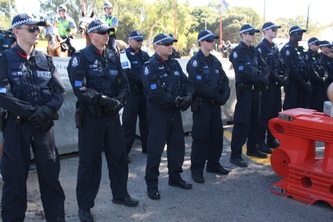 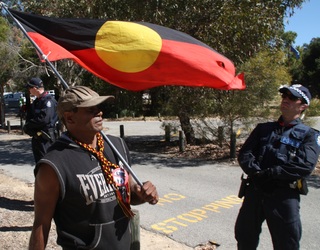 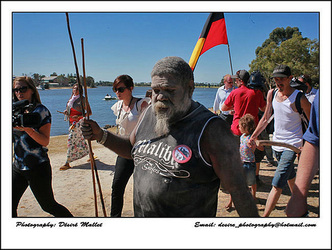 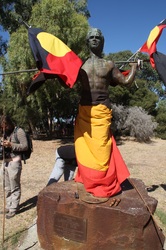 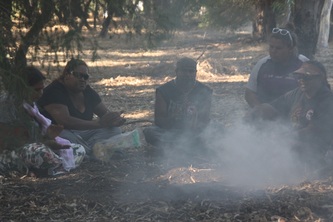