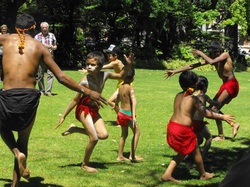 Indigenous Peoples make up more than 5 percent of the world’s population; some 370 million people. The Nyoongar Tent Embassy’s work to develop a framework, charter, and treaty will prepare the Nyoongar Sovereign Peoples to join this international movement and participate in the 2014 World Conference.
Powered by