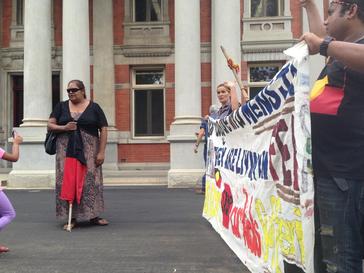 Following an incident that happened on the 20th of December 2012 roughly half of the boys being held at the Banksia Hill Detention Centre were transferred to Hakea Adult Prison. During the transfer they were mistreated, and the conditions at the prison were terrible.  The boys reported continued mistreatment by the prison guards, long periods of lockdown, minimal access to family through visits and phone calls, hardly any recreation or education, and no access to programs. In addition the food was insufficient and they had to deal with abuse and threats from the adult prisoners.

In conjunction with Shine lawyers and SCALES community legal centre, and supported by family members of the boys, the Deaths in Custody Watch Committee (WA) and Youth Bail Service WA, the Nyoongar Tent Embassy took an action to the Supreme Court to try and address some of these conditions and get the boys transferred back to Banksia. This court case uncovered the systemic problems within the Department of Corrections including understaffing and the woeful lack of contingency planning regarding situations of emergency.

While the action was unsuccessful, as a result of the media coverage and the associated pressure, the conditions at Hakea immediately began to improve. Lockdown periods were reduced; the food improved and there was better access to education, recreation and programs. There was also assurance given that the boys would be transferred back to Banksia at the earliest opportunity; the Nyoongar Tent Embassy waits to see if the Department of Corrections lives up to this promise.

Amnesty International Australia officials were asked to visit Hakea Adult Prison as a Human Rights Watch Group to observe conditions first hand. The Department of Corrections refused access to the Amnesty group with Commissioner Johnson stating his staff  didn’t have time to act as “tour guides”. Amnesty International is involved in a major project investigating Aboriginal juvenile justice and the high rates of incarceration in Queensland and Western Australia.