PROTEST OF THEFT OF WOMENS’ SACRED OBJECTS FROM MATAGARUP

Matagarup (Heirrison Island) is an island of cultural significance for our people, which has led to the registration of the site with the Department of Indigenous Affairs in Perth, Western Australia. The site registration allows camping and a number of other activities with the consent of the custodians of the area. We represent the custodians and have the permission from the various Elders to engage in cultural activities when called upon. Many times our rights have been infringed by the City of Perth, who manage the island, and the Western Australian Police Force, leading to a large confiscation of our personal possessions without the jurisdiction or authority for them to do this to our people. For further information we can provide media reports as well as statements from Elders and people involved in the various raids on our island, as the WA Police force inflicted military terror on women and children and also men.

What has led to this email today is the desecration of our sacred sites on the island, in the form of a very culturally significant and important and old female stone with the totem of a female inscribed into the carved out rock. It was placed on a totem pole and placed in an area on the island to sit and wait for our women to come and participate in an event on the 25th January, and it was our role to guard the sacred stone until that time. This stone has been removed without our consent and if touched by a male they will become very ill. The stone is of huge importance and needs to be returned to our women.

So we call on your organisations to place pressure on our WA Police Force and the City of Perth by demanding a full investigation into the theft of our stolen sacred stone and demand it be returned to us within the next 24hrs. It belongs in the hands of our women and while it remains missing our cultural, religious and human rights are being infringed by being ignored. Such desecration of sites should not be allowed to continue and we call on you to support the women of the Derbarl Yerrigen and help us have the stone returned. Stop enabling the government to do this to our people and speak the truth for once on behalf of the true custodians of the land you walk on every day. 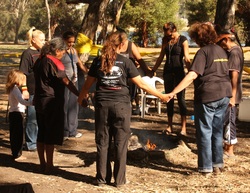 After pressure from the Nyoongar Tent Embassy, the WA police launched an investigation into the theft of the sacred women’s object and confirmed to the NTE that the City of Perth was in possession of it. The City of Perth continues to deny they have the stolen sacred object.

The Nyoongar Tent Embassy has advised the City of Perth, that due to the handling of the object by men, and in particular non-Tribal Sovereign men, a special ceremony will be performed when the sacred women’s object is returned.